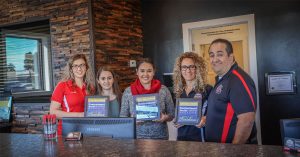 Jon drives a 2015 Volkswagen Passat. He noticed that his car had a serious transmission fluid leak, so he tool it to the local Volkswagen dealership first. They diagnosed the problem, but let him know the repair was going to be very expensive. Jon wanted a second opinion before making a final decision, so he brought his Passat to the Central Valley transmission specialists at Ralph’s Transmission in Modesto.

Our transmission diagnostician ran tests that revealed several different fault codes. The external inspection confirmed that there was a significant fluid leak, but it was clearly an internal problem and not just a worn pan gasket. Our technicians than removed the transmission from the vehicle for a complete internal inspection. Several problems were discovered, including a worn valve body, burnt K1 clutch and failing pump assembly. The internal damage was extensive, so the best recommendation was to fully rebuild the the transmission.

“I brought my car to Ralph’s after getting a quote from the dealer for $9100. I about died,” Jon writes in his Yelp review. “Ralph’s made the repairs and saved me some serious money.”

Jon was glad he had the warranty when he continued to have problems shifting into reverse after the rebuild was completed. The new valve body was not working right and had to be replaced again. After some troubleshooting and further repairs, our team was able to get the transmission back in perfect shape. Now, Jon is able to enjoy his car once again and we were able to save him several thousand dollars compared to the dealer quote!

“My car did give them a hard time and it took longer than expected,’ Jon adds. “Even though it took longer I knew it was because they wanted it to be right. The ladies up front are knowledgeable and professional.”

Thank you, Jon, for putting your trust in Ralph’s Transmission and for your patience during what turned out to be a very tough job. European cars are often challenging, but our team is the best at what they do and we will always make sure the work is done right no matter how much time it takes.

For anyone in the Central Valley needing transmission maintenance or repair services, call Ralph’s Transmission today at 209.526.1909 or schedule your service appointment online.